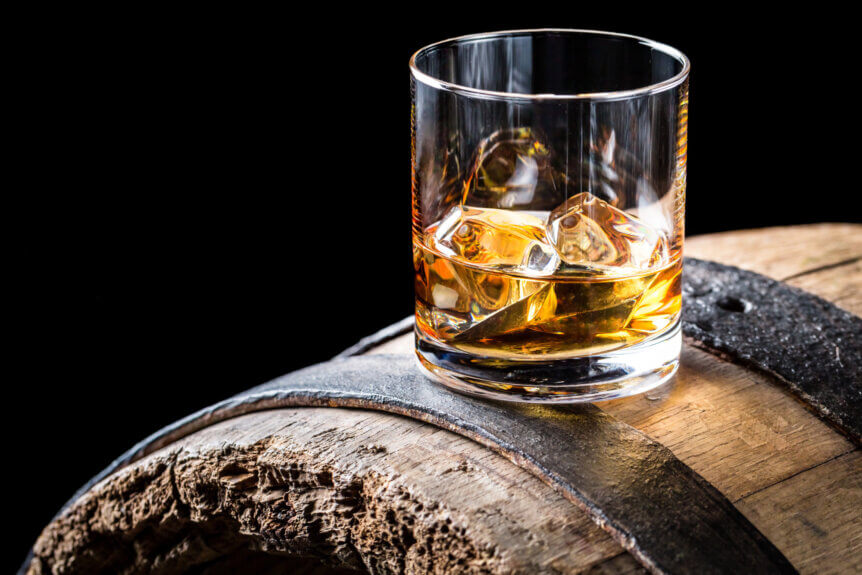 It goes without saying that not everyone is a whiskey or bourbon fan. Some people just don’t enjoy the taste of these velvety brown liquids — and each to their own. But whether you’re a lover of whiskey or bourbon or neither, there is a major difference between the two.

Even some of the most hardcore fans may not know the exact difference between whiskey and bourbon besides the label, but while they are both classed as whiskey, not all whiskey is classified as bourbon. Confused yet?

Don’t worry, we’ve got you covered in this blog. Read on to learn more about these famous tipples.

How Is Whiskey Made?

Did you know that whiskey is one of the world’s oldest spirits that was first distilled way back in the 1400s by none other than the Scots?

In Scotland, whiskey (actually known as whisky) is a national treasure and home to the most ancient bottle of whiskey in the world. It’s a Glenalvon whisky liqueur that dates back to 1858, making it almost two centuries old!

Whiskey is a simple spirit, distilled from fermented grain mash, which includes grain varieties such as wheat, barley, rye, and corn. It’s a spirit that is not distilled beyond 190 proof in order to avoid making a neutral spirit, such as vodka. It’s then aged in specific oak barrels for a minimum of three years before it’s bottled.

Today, whiskey is super popular the world over and includes a number of styles of this spirit. Some of which range from Scotch whiskey, American whiskey, Canadian whiskey, Irish whiskey, and Japanese whiskey.

How Is Bourbon Made?

Bourbon is iconically American and is not made in any other part of the world. In fact, the production of bourbon is tightly regulated by the Alcohol and Tobacco Tax and Trade Bureau in order to qualify as a true bourbon.

Bourbon has come a very long way over the past 100 years. It was first considered a commodity spirit — it was bitter and had a reputation as a ”cheap” drink. However, experts have honed the recipe and developed it to produce a beautiful, rich, and smooth American whiskey which is something to be proud of today.

So, how is bourbon made? It’s also distilled from a fermented mash of grain, yeast, and water. However, there are strict regulations on the type and amount of each grain in the mash. This is what gives bourbon its iconic flavor.

It’s a requirement that bourbon ages for a minimum of two years, however most premium bourbons age for five-12 years. The aging process takes place in brand new barrels made from white oak, specifically charred on the inside. Different bourbon brands use different types of charring levels in their barrels to add a unique flavor.

The Difference Between Whiskey and Bourbon: 4 Key Factors

So far it sounds like whiskey and bourbon are pretty much the same type of spirit, so what exactly differentiates the two? Bourbon production requires specific protocols in order to be called a bourbon. Whiskey, on the other hand, does not include all of these protocols. Hence the reason why whiskey can never be called bourbon.

These four key protocols include:

This is one of the key differentiating factors between bourbon and whiskey. While both spirits use fermented grain as a base, the grain ratio for bourbon must include 51 percent corn.

As per the American Bourbon Association, this is a prerequisite for declaring this type of whiskey a bourbon. It’s also what gives bourbon its sweet flavor.

Another key determining factor for bourbon is the fact that it’s aged in new, freshly charred oak barrels. The barrels cannot contain any colorings or additives, either.

When it comes to bourbon, the barrels must be made from white oak, and the aging process takes a minimum of two years for all straight bourbon whiskeys.

ABV refers to the level of proof or alcohol content in a spirit. When it comes to bourbon, it must hit certain ABV marks in order to qualify as such. In order for this to happen, bourbon mash is distilled at 160 proof or less, then aged in barrels until it reaches a level of 125 proof — which is about 62.5 percent alcohol by volume.

Before bourbon is bottled, it must be filtered and diluted to no less than 80 proof, or 40 percent alcohol. With regards to other types of whiskeys, there is no real maximum of minimum ABV for the final distillate.

Bourbon is its own classification of whiskey based on its iconic sweet flavor — not because of the label on the bottle! As mentioned, it’s the ingredients that are used to create a bourbon that makes it distinctly different.

A spirit such as bourbon tastes different from rye whiskey because it’s made with distilled corn. In other words, it’s made with the same basic processes, but just a different recipe. In some bourbon recipes, they may use different yeast strains to add unique flavor, too.

All-in-all, both spirits are artfully made, beautiful in flavor, but distinctly different based on their ingredients, aging, and proofing processes.

Looking for Bourbon or Whiskey Barrels?

The key difference between whiskey and bourbon is the law and the Federal Standards of Identity for bourbon. But when it comes to flavor, it’s up to you to decide which you prefer best!

If you’re looking to infuse bourbon and whiskey flavors into your beer, wine or spirit, Northeast Barrel Company is your go-to for quality used barrels. Learn more about our whiskey and bourbon barrels today!