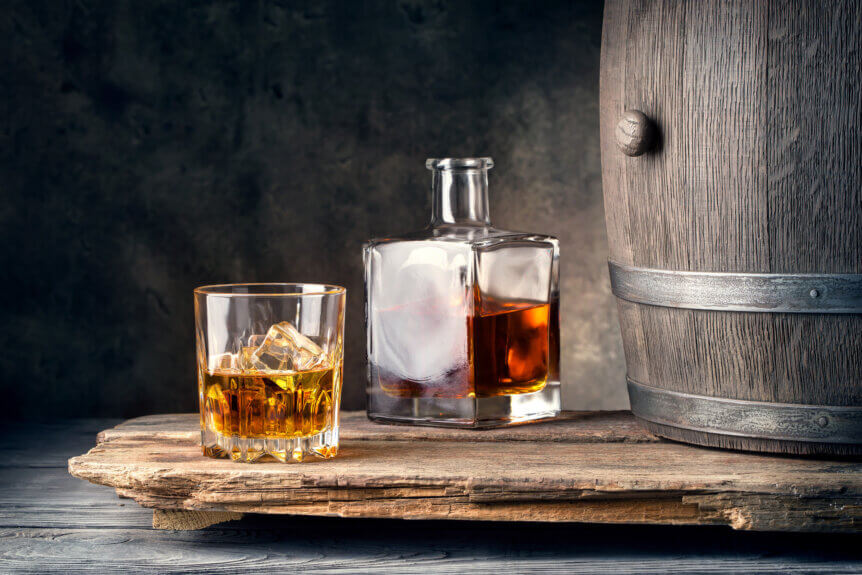 What’s your cocktail of choice? Maybe you’re an Old Fashioned kind of person, or, perhaps you like to end a long, hard week with a refreshing Mint Julip.

These options may seem like totally different drinks if you’re new to spirits. However, the two have a common link. These cocktails, and many others, contain whiskey as a primary ingredient.

The word whiskey can be confusing at first. There are several types of liquor that fall under the broad category of whiskey. How can these various types of whiskey all fit under the same umbrella?

To answer this question, we must first ask how is whiskey made? Each type of whiskey follows a similar process.

If you want to understand the different types of whiskey, knowledge of the whiskey-making process is incredibly helpful. In this article, we’ll walk you through the basic process behind making whiskey.

By the end of this guide, you’ll understand the differences between whiskey vs. bourbon or whiskey vs. Scotch. Let’s jump right in!

How is Whiskey Made: Examining Ingredients

When whiskey makers set out to make their liquor, there are a couple essential ingredients.. First, there’s grain mash.

Most alcohol-making starts by choosing an agricultural product that undergoes a fermentation process. For example, wine often uses grapes and other fruit, while beer usually uses barley and hops.

The base  is important because it contributes significantly to the flavor. It also plays a role in the final product’s designation.

The designation refers to what people will consider this drink. Is it Scotch, rye, Irish Whiskey, etc.?

Next, like most drinks, whiskey requires water. Once distillers finish the distillation process, they add water to the product. The amount of water varies depending on the desired alcohol level.

After water, many whiskey makers add optional additives and flavors to give the liquor a special kick. Some add botanical items, spices, flavor additives, or extra color during the aging or distilling process.

Finally, distillers store the whiskey in wooden casks or barrels to bring out the maximum flavor. US regulations require whiskey to age for a minimum of two years, but many distilleries age their Whiskey anywhere from 4-20 years, or longer which greatly enhances the flavor of the spirit.

Now that you know the core ingredients for whiskey let’s talk about how to use them. The various types of whiskey follow some version of this process.

First, distillers create a fermentable base with mixed grains, water, and yeast. Once they’ve mixed these ingredients, they heat and stir the mixture, which many call “whiskey mash.” The goal is for the mash to combine the ingredients in a balanced way, making the mix ready for fermentation.

Next, developers store the base mixture for a set amount of time. Usually, this falls between one and two weeks.

During this time, the mixture fully ferments. As this happens, the compounds break down into natural alcohol called ethanol.

Once fermentation is complete, the producer strains and separates the liquid from fermented solids. The solids no longer play a role in the distilling process.

The next step in the process is distillation. At this time, whiskey producers purify their liquid solution by heating and vaporizing it.

Next, the vapor is collected as it liquifies. This restored liquid is a purer solution because it removes any impurities in the evaporation process. It’s also a more alcoholic liquid than before the distillation process.

Once developers complete the distillation process, they have three products to sort. The first is an ethanol product containing methanol or acetone.

These products can be tremendously toxic for consumption. Once distillers collect this product, they usually throw it out. These liquids called the “heads,” account for the first 35% of the final solution.

Next, distillers sort through for the “hearts,” which are the best alcohol product. Usually, this accounts for about 30% of the final product.

Finally, there are the “tails” of the process. This liquid is an impure solution, but developers can redistill them later.

You may not think the type of barrel matters much in whiskey storage, but it can have a significant impact. For this reason, distilleries use several types of barrels for aging. Some use new oak barrels, charred barrels, or even containers soaked in wine.

At this stage, the whiskey may have much more alcohol than necessary. If the percentage of alcohol is too high, many distillers will add water to the mixture either before or after the aging process. Some even add water at both points to ensure adequate dilution.

The process comes to a close as distillers bottle their products. These labeled bottles are the drinks you see lining the shelves of liquor stores. Once the whiskey enters its bottle, it is ready to be consumed.

As mentioned earlier, the various types of whiskey follow some version of this process. So, if they all use the same development methods, how do people distinguish different types of whiskey?

Often, the answer comes from locations. Different nations and regions use differing aging methods and ingredients to produce distinctive drinks.

For example, bourbon comes from the US. The drink must have at least 51% corn to qualify as bourbon. Likewise, it must age in newly charred oak barrels, a process that gives it a caramelized flavor.

Irish whiskey, however, comes from malt, cereal grain, and barley aged in wooden casks. Likewise, this process must occur in Ireland to qualify the drink as Irish whiskey.

Get the Best Barrels for Aging

As you can see, the answer to “how is whiskey made” is complex and intricate. Several factors affect the final whiskey product, ranging from the mash ingredients to the aging container.

The barrels in which you age your whiskey plays a crucial role in the final product. If you’re a distiller, you need the best barrels available to ensure a quality end product.

Fortunately, we have just the solution! We offer several types of barrels that produce the best flavors in whiskey. Contact us today to learn more about our products!