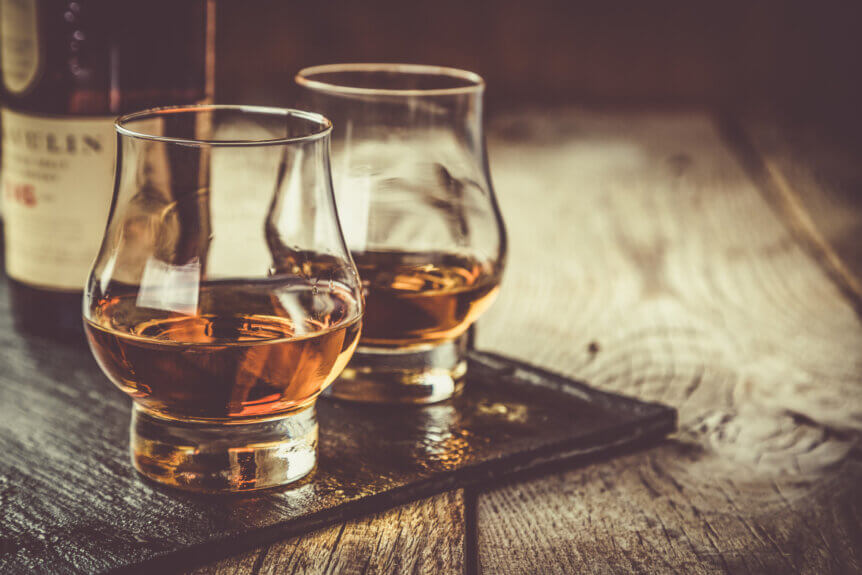 Did you know that scotch was first produced around the year 1494? Whiskey has an even older history, and today, both Scotch and Whiskey remain very popular among liquor enthusiasts. While these spirits are both delicious in their own way, let’s explore the main differences between whiskey vs scotch.

Fortunately, you’ve clicked on the right article to answer all your whiskey and scotch questions. You might find it surprising how two drinks similar in appearance can have so many differences! This article will help explain how whiskey and scotch are made and the differences between the two.

To begin, we will explore where whiskey comes from and how it’s made.

All whiskey originates with grains such as barley, wheat, or rye which are combined with sugars to accelerate the fermentation process.

The first step is the malting process, which begins when these grains sprout. The grains are then heated at high temperatures and mashed.

This mashing allows for the release of sugars within the grains. Next, hot water is added with the grain to create a soupy mixture. The grains will sit in the hot water until enough sugar leeches out, creating a mixture known as mash.

Fermentation occurs when yeast is added to the mash. Yeast thrives on the sugar in the mash, using it as a form of sustenance. As the yeast consumes sugar, it gives off alcohol as a biproduct.

The fermentation process takes several days to complete. However, the resulting slurry still has a relatively low alcohol content of about 10%.

So, how is the alcohol content increased to create proper whiskey? The answer is via distillation.

Pot stills are typically used to distill whiskey as many as three times. The liquid inside the still is heated until it simmers, which allows the alcohol and water to separate. The excess water is boiled away.

After achieving the desired alcohol concentration, the whiskey is then left to mature in oak casks. Though some of the alcohol is lost during the aging process, the taste and aroma of the drink improves the longer the spirit is aged in oak casks.

There are too many types of whiskey to list all in this article, but the most popular kinds include bourbon, rye whiskey, Japanese whiskey, and blended whiskey. The difference mainly comes from the kind of grain used in the mashing process.

One of the most prestigious whiskey types is single-barrel whiskey. As the name suggests, this kind of whiskey is not mixed or blended with any other varieties. Single-Barrel whiskey ages alone in a single barrel and originates from one type of grain, resulting in a more refined and pure whiskey.

Now that you know the basics of whiskey, it’s time to take a look at where scotch comes from. You might find it interesting to know that scotch is actually a type of whiskey, malt whiskey to be precise! However, it is important to note that not all whiskey is scotch.

As the name might suggest, scotch originated in Scotland where much of it is still produced in Scotland today. Unlike whiskey which is made from a combination of barley, rye, corn, wheat, or any mix of grains, scotch is exclusively made from barley.

Only the barley of the highest quality is selected to make scotch. The barley, once selected, is then soaked in water for a period of time and then dried.

However, the barley does not sit idle as it dries. Instead, the barley is tossed around by a machine or shovel-wielding workers. This process allows the barley to germinate and build up plenty of sugar.

This process can take up to a week to complete. Afterward, the barley is further dried often by flames., It is imperative that the barley is not thoroughly cooked otherwise the structure and flavor of the barley could be compromised.

In order to give the scotch a smoky flavor, some scotch manufacturers may choose to add a bit of peat into the fire. After the drying process, the barley is mashed similar to the grains used for whiskey. The mashed barley is then added to nearly boiling water which will help to bring out the sugars in the grain.

Once the mashed grain simmers and enough sugar becomes extracted, the grain leaves the mixture and only the sugary liquid remains. This is where yeast gets tossed into the mix and the temperature of the mixture reduces to allow the yeast to begin fermenting.

The fermentation process for scotch will only last a few days and creates a weak alcoholic liquid. As with whiskey, the scotch is poured into a pot still and distilled at least twice in order to increase the alcohol content. Once the scotch reaches an alcohol concentration of around 60%, it is transferred to oak containers to mature.

To learn more about liquors from the leading barrel experts, contact us here.