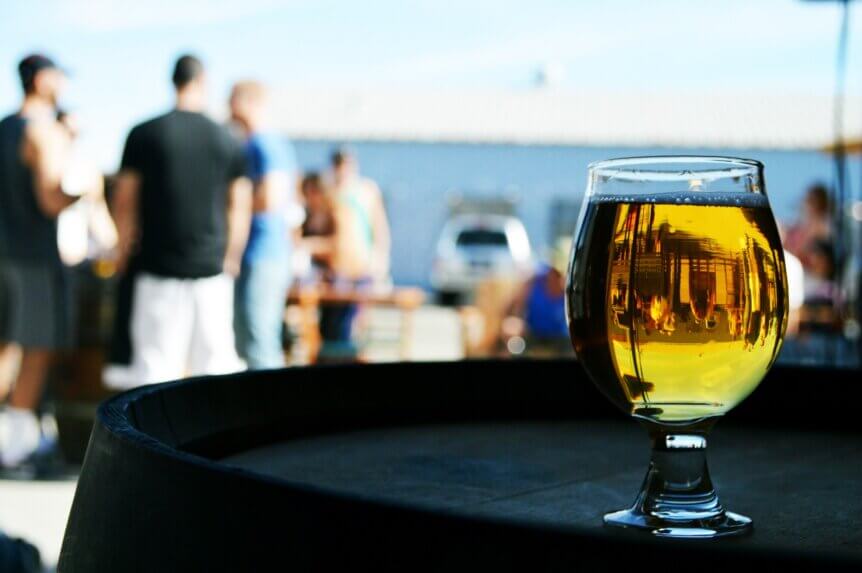 The number of breweries in the United States has been climbing for over a decade, rising 4.5% to over 8,000 breweries from 2019 to 2020. With brewers experimenting now more than ever, the possibilities for beer enthusiasts are endless.

But have you heard of the latest craze in the brewery world? Amburana wood is all the rage since an Amburana stout took home top prize in the Wood-Aged beer category at the Great American Beer Festival in 2018.

There’s no doubt that Amburana wood barrels will soon spread to breweries across the country. But what’s so special about this particular oak? And where did it come from? Read on to discover the Amburana’s unique origins and enticing characteristics.

The Amburana wood is also known as Cerejeira wood in its native country of Brazil. This impressive tree can tower at over 100 feet with a diameter of 2-3 feet. Its color ranges from yellow to light brown, with a texture ranging from medium-coarse.

With a waxy appearance and interlocked grain, the Amburana is an attractive wood that offers a special aroma. Most important to brewers, the Amburana gives off a vanilla scent and a spicy-sweet flavor.

The Brazilian wood’s purpose before the discovery of its craft beer capabilities lies in the lumber industry. Its use varies from construction to furniture making. Let’s dive into Amburana’s particular history in Brazilian liquors to understand its current rise in popularity.

The Amburana wood beginnings are in the dry regions of Brazil and Argentina. Brazilians aged cachaça in Amburana and blended it with cachaça aged in European oak barrels. These blends create intense aromas and fascinating flavor.

It’s proven that the Cerejeira wood and other Brazilian woods created a high amount of maturation compounds. In alcohol speak, that means strong flavor and complexity in sugar cane spirits. So the science proves that Brazilian woods lead to tasty alcohol!

Amburana Cachaça is a rum-like spirit that features warm notes, making for a great savory ingredient in various cocktails. The aging process of cachaça in Amburana wood creates a singular flavor profile only achieved by wood from the Brazilian region. So why not use the same incredible wood for aging beers?

Small, local homebrewers of Brazil began to get noticed by brewers from the United States when the South Beer Cup launched in Buenos Aires in 2011. Eventually, an Amburana-aged beer was awarded a medal. And the Amburana Brazilian beer fascination was born.

Wood barrel-aging can be instrumental in the craft brewing process. Usually, beer is aged in barrels formerly used to age spirits or wine. Bourbon barrels are the most popular choice, as the charring process helps bring out the vanilla wood flavors for the beer.

The different levels of charring used by each distillery distinguish each barrel. This provides a wide array of flavor opportunities for brewers. On the other hand, aging beer in wine barrels often leads to more bacteria production. This makes for more sour and acidic beer varieties.

A quicker and manageable method for brewers is wood-aging. Wood-aging may sound similar to the barrel-aging process, but wood-aging involves adding cubes or chips of wood into the beer instead of placing the beer in a wooden barrel. This method provides a different kind of wood flavor to the beer.

Rise of the Craft Brewery

Major beer companies still dominate the beer industry in the U.S. But the small, independently run American brewery is on a steady ascent. Craft brewers specialize in experimenting with wacky flavors and ingredients. So they offer unique beers that consumers can’t get from leading beer brands.

The American pursuit of a good beer experience and the rise in talented craft brewers collided to spike craft brewery popularity. Nowadays, certain states even produce up to 3 million barrels of craft beer per year!

Craft brewers are always working to create the next big craft beer. To stand out, experimentation in the barrel-aging process is necessary. Enter the fascinating foreign wood- the Amburana!

So what is the special appeal of the Amburana wood? Toasted Amburana wood chips give off a fragrant aroma like that of baked goods. It’s spicy and warm and inviting. Some even describe it as cinnamon-like and similar to holiday spices.

The word is out! Now all that’s left is the hurdle of importing Amburana wood to the Northern Hemisphere. The use of this attractive wood will certainly open the floodgates to the many flavor opportunities from Brazil. Beyond the Amburana, Brazil offers many unique kinds of wood and exotic tropical fruits.

The Amburana wood proves that there’s no better time to start broadening the horizons of your brewing options than now.

The Best in Oak Barrels

At Northeast Barrel Company, we keep on top of the trends in the barrel-aging process of beer, wine, and spirits. We have high-quality barrels trusted by distributors, distilleries, and brewers worldwide. Shop our barrel inventory for all of your barrel-aging needs today!