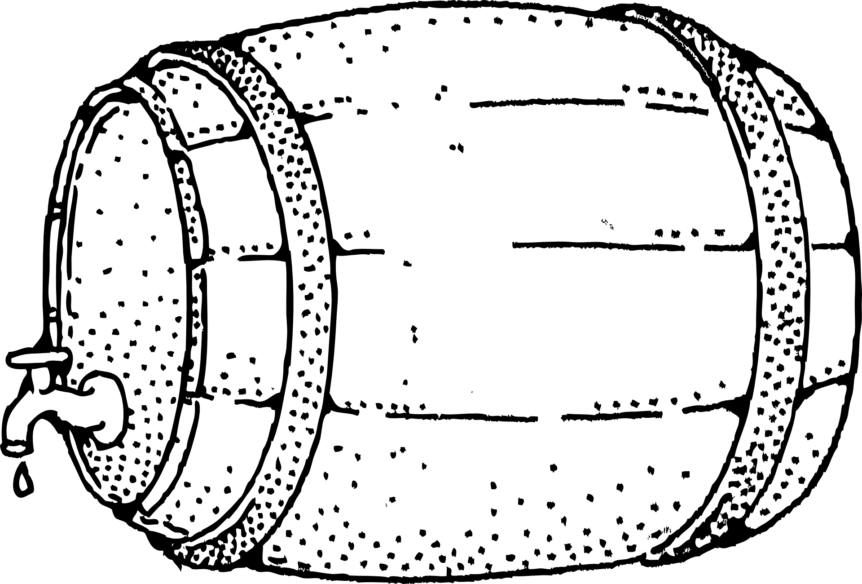 Barrel aging beer is one of the best ways to brew a beer that has a memorable and nuanced flavor that you will savor with each sip. But the first barrel aging of beer was an accident.

If you’re a beer lover, you may have heard the history of India Pale Ale (IPA). IPAs originated when pale ales brewed in England and were exported to India in wooden barrels. The beers were highly acclaimed for their distinct taste after spending months in the barrels during their journey by sea to India.

For many beer makers and IPA lovers, this history might have sparked an interest in aging beer to develop a more complex flavor.

This guide will help you to understand some of the benefits of barrel aging beer so that you can start making the most out of your beer.

The Process of Barrel Aging Beer

Like with wine and spirits, barrel aging occurs when beer is aged inside a barrel. The barrel is typically wood and oftentimes has already been used to age wine, other spirits like bourbon, or even maple syrup.

The barrel wood plays a key role in the flavor that is imbued into your beer during the aging process. Oak is the most common wood used.

Oak is a watertight wood but it is porous, which allows the beer to soak into the wood absorb some of the flavors from the oak.

Barrels are usually charred on the inside to create a light, medium, or heavy toast. The toast determines the strength of the flavor that the barrel imparts.

But aging beer is more complicated than simply pouring it into a barrel and waiting around for a bit. Aging beer can take anywhere from 6 months to years. Different beers require different lengths of aging in the barrel to fully develop the best flavor profile.

The Benefits of Barrel Aging Beer

The main benefits of barrel aging beer are the nuanced and complex flavors that develop during the process. The process can tone down bitterness resulting in a more mellow and well-rounded flavor.

These changes in flavor occur for a variety of reasons. Here are the main ways that barrel aging influences the flavor of the beer.

Because oak is a porous wood, barrel aged beer absorbs some of the flavors of the wood of the barrel.

French oak and American oak are the most commonly used woods in barrel making. American oak has a stronger flavor with notes of vanilla, baking spices, dill, and coconut. French oak has more subtle flavors of chocolate and mild spices.

A used barrel can also imbue the beer with the flavors of whatever was last aged in the barrel, like wine, spirits, or even maple syrup.

When you’re brewing beer, you know to be careful to keep oxygen away from the process. Too much oxygen early on in the brewing process can result in a musty tasting beer. But slow exposure to oxygen is what creates the subtle flavors in aged beer.

Aging beer in a barrel allows for slow oxygenation. Oxygen slowly leaks through the porous oak, which develops different flavors in the beer. Slow oxidation can help to round out bitterness in beers and allow other flavor notes to shine through.

The wood in barrels is home to many different bacterias and wild yeasts that are extracted into the beer while aging. Though general brewing practices take great pains to prevent contamination from any bacterias other than brewing yeasts, beers that are barrel aged benefit from the other organisms they come in contact with.

The many microflorae that are introduced during the barrel aging process can actually introduce new flavors and mellow out the overall flavor profile of the beer.

Which Styles of Beer are Best for Aging

Generally, beer is best when consumed as soon after the brewing process as possible. This is because exposure to oxygen can change the flavor of the beer negatively.

However, aging beer can allow some beers to fully develop robust flavors. The success that can come from barrel aging beer depends on the type of beer.

Beers with higher alcohol by volume (ABV) are more likely to develop a positive flavor profile through aging. Additionally, hoppier beers will likely not fare well with aging. Despite IPAs being linked to a history of traveling overseas in barrels, they are not appropriate for aging because of their hoppy flavor.

Stouts and porters are beer varietals that are commonly recognized as benefitting from the aging process. But they aren’t the only beers that are fit for aging.

Sour beers introduce the probiotic lactobacillus during the aging process. The result is a tart and fruity flavor.

Wild fermented beer is also increasing in popularity. These beers might be exposed to outside air during the brewing process and do not take the same care to prevent exposure to anything other than the standard brewing yeasts.

Wild fermented beers are sometimes categorized as either lambic beers, which come from Belgian, or American wild ale. These beers are distinct from sour beers since they introduce unique yeasts during the brewing process.

Take the First Step Towards Your Best Brew Yet

To make the most out of your beer making venture, try barrel aging and allow complex and unique flavors to shine through. The aging process rounds out the flavor of your beer, resulting in your best brew yet.

Reach out to us today to find out how our authentic and quality barrels can help you craft your best brew yet.