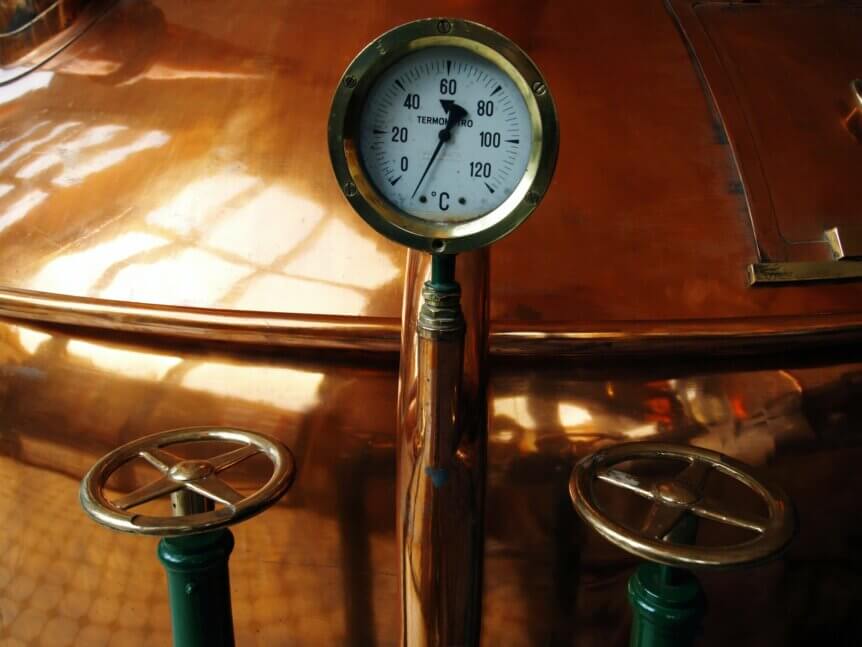 Barrel-aged and barrel-fermented beer are experiencing a renaissance in the world of brewing. For many serious and passionate brewers, beer fermentation in wood barrels is considered far superior to fermentation in stainless steel.

If you want to brew beer with an entirely distinctive and unforgettable flavor, barrel fermentation is the way to do it.

But you don’t need to be a professional brewer to ferment beer in wood (although it will certainly take some practice and patience to get it right.) You can barrel-ferment beer at home with the right materials.

What Is the Benefit of Aging Beer in Wood Barrels vs. Stainless Steel?

Since the beginning of human history, wooden barrels have been the primary container used in aging beer. But that changed when stainless steel barrels became the standard in the 1950s.

Stainless steel gained popularity quickly because of its durability. It’s also much easier to clean and sanitize than wood and produces a more predictable result. Producing a consistent product is important to most producers of beer.

However, among artisan brewers, aging beer in wood barrels has become something of an art form. If you’re looking to brew a truly unique beer with a complicated and intriguing flavor profile, wood is the way to go.

During the barrel aging process, the organic compounds contained inside the wood disintegrate. They add flavor to the beer. Because wood is porous, it lets microorganisms into the barrel, adding additional flavors to the beer.

The combination of all of these compounds and organisms contributes to a one-of-a-kind taste experience.

If you decide to go the stainless steel route, a conical beer fermenter is key to achieving a professional at-home brewing experience.

If you live in a hot or cold climate where it is challenging to maintain a consistent temperature in your brewing setup, you would also benefit from investing in a beer fermenting fridge or beer fermentation tank.

What Kinds of Wood Barrels Are Used in Beer Aging and Fermentation?

Almost always, brewers use oak barrels for aging beer. Every characteristic of the barrel affects the taste of the beer.

For example, a smaller barrel will have a more significant effect on the flavor of the beer. This is because there is a higher wood to beer ratio.

Finally, the amount of char on the barrels and the residue leftover from what was originally contained in the barrels will contribute to the beer’s flavor.

What Is the Difference Between Beer Fermentation and Aging Beer in Barrels?

Barrel-aged beer is stored in a wood barrel that was chosen for the unique flavors it will contribute to the beer during the aging process. Many brewers enjoy using bourbon barrels for their vanilla, toffee, and caramel essences.

Beer that is aged in barrels is not fermented in wood. It is typically transferred to stainless steel containers for the fermentation process. Afterward, the beer may be again transferred to a wooden barrel for more aging.

When beer is barrel-fermented, there usually is not a barrel-aging step in the process. Instead, the beer undergoes an extended fermentation period.

A barrel-fermented beer will generally have much more complex and memorable flavors than only barrel-aged beer.

How Does Beer Fermentation in Barrels Work?

The first step in brewing any kind of beer is the creation of wort. Wort is the initial liquid output. It contains sugar from the mashed grain that is rich in nutrients.

After the initial inoculation, the brewer puts the wort into wooden barrels, adding yeast and bacteria. This is where the fermentation takes place.

The most commonly used species of yeast in beer fermentation is Saccharomyces. However, wild brewers have tried unique methods like using communities of wild yeast to ferment their beer, following a Belgian tradition.

During the primary fermentation process, the yeast breaks down the sugars from the wort into alcohol.

Fermentation puts pressure on the wooden barrel by creating heat and carbon dioxide. This causes the wood to expand and contract. This is how the flavors from the barrel make their way into the beer.

The fermentation process can take months or years to get the desired flavor profile. The wood notes in barrel-fermented beer are much more unique than those contained in barrel-aged beer.

Barrel fermentation is not at all as predictable as stainless steel fermentation. This is why it yields such complex and intriguing results. You can truly taste the love the brewer put into the beer’s creation.

Where Can You Find Quality Barrels for Beer Fermentation?

Are you considering taking your brewing skills to the next level? Wood barrel beer fermentation will allow you to produce a one-of-a-kind beer that is unforgettable and complex.

To get the best quality wooden barrels for the right price, look no further than Northeast Barrel Company. They offer authentic, high-quality, used barrels responsibly sourced from reputable international suppliers.

Check out their range of wood barrels, including whiskey, gin, wine, rum, and mezcal, to see what strikes your fancy.